Is The Fear of Failure Holding You Back? 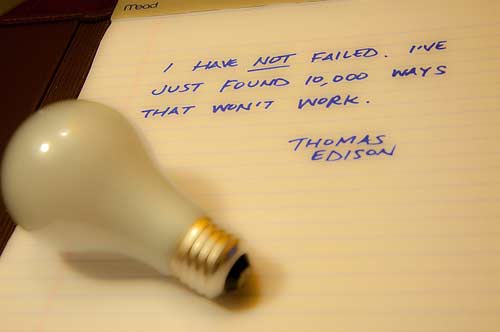 Changemakers and visionaries are especially prone to the fear of failure.

If you have the audacity to believe that you might be able to change the world, even on a small scale, this beautiful impulse is more than likely accompanied by some level of doubt or fear.

I’ve coached hundreds of visionary entrepreneurs through my programs, and I don’t think I’ve met a single person who didn’t fear failure to some degree.

“Security is mostly a superstition. It does not exist in nature…. Life is either a daring adventure or nothing.”

What would you do if you knew you could not fail?  If success was virtually guaranteed, what would you attempt to create?

The answer to that question will show you where you are allowing the fear of failure to hold you back.

“I can accept failure, but I can’t accept not trying.” – Michael Jordan

Fear of failure can stop you before you even get started.  It can also lead to making only a half-hearted effort which lacks energy and enthusiasm.  Taking no action virtually guarantees failure, while making only a half-hearted effort will more than likely lead to failure, or mediocre results at best.  Your fear ends up being a self-fulfilling prophecy.

If you are able to overcome your fear enough to get yourself to make a serious effort, the fear can still sabotage your success.  You will attract what you focus on with emotion.  So if thoughts of failure pop into your mind frequently, and they are accompanied with a significant emotion such as fear, you will probably manifest that failure.

So, why not “Fail Your Way To Success”?

“I’ve missed more than 9000 shots in my career.  I’ve lost almost 300 games.  26 times, I’ve been trusted to take the game winning shot and missed.  I’ve failed over and over and over again in my life.  And that is why I succeed.” –  Michael Jordan

Failure is a sign that you are in the game, on the court, making an effort.  You’re 90% closer to success than all the other folks sitting on the sidelines, too scared or too lazy to get in the game.

“Would you like me to give you a formula for success?  It’s quite simple, really.   Double your rate of failure.” – Thomas J. Watson, founder of IBM

You may have learned to chastise yourself when you fail.  Your parents, teachers, coaches, and friends might have thought they were doing you a favor when they criticized you harshly for not living up to their standards.  You may have internalized this self-critical voice, which only serves to make you miserable, and stop you from getting on the court of your life and going for what you really want.

The fear you have of failing might actually be an avoidance of the self-criticism and misery you will create for yourself if you don’t hit your target or meet your own expectations.

You can unlearn this bad habit of criticizing yourself, and create a new supportive habit of celebrating failure.  Instead of getting down on yourself, you can acknowledge yourself for making the effort, facing your fears, and getting in the game where you can learn, improve, and adjust your strategy until you reach success.

What if failure was a “Gift”?

Some people have made such good friends with failure that they don’t even call it failure any more.  The experiences they used to label as “failures”, they now refer to as “learning experiences”, “a step along the path”, or even “a gift”.  If there was no failure in your life, only learning experiences, how would your life be different, emotionally, mentally, socially, physically and spiritually?

Please comment below.  What has been your experience with confronting the fear of failure?

Would you like to hear intimate interviews with 18 socially conscious changemakers who conquered their own fear of failure enough to succeed, against all odds, at creating humanitarian products, services and organizations that dramatically improve people’s lives and make healthy profit?  I interviewed them myself, and convinced them to share some their personal journey, and what it took to overcome their own inner blocks to success.  Get free instant access to these interviews here:

These Are The Inspirational Speakers